I’ve been working with PC’s since the early 90’s, spending way too much money updating hardware to just try and make life a little easier. These big, noisy PC’s were just not that well suited to tiny office apartments.  The mess of cables wrapped up around the back of the machine, the monolithic black cases with so many blinking lights, the dust bunnies that would build up right around the air intake. 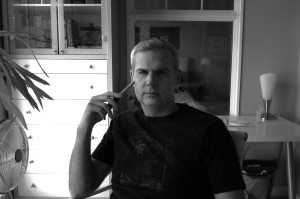 Yes there are always fixes to deal with many of the issues that crop up with a tower, but with so many choices out there all at different prices and availability it seemed it was a weekly routine of mine to cruise the local online sale flyers for the next mediocre improvement.

Seven years ago I decided to take a step back.  What did we really need in a home PC? Audio recording options (my girlfriend is a singer), music playback for our extensive CD collection recently converted to mp3, and of course photo management and editing.  Add to that the need to surf a little on the internet and it sounds like a pretty basic machine. My girlfriend had only one request.  “Can it be small and look good?” My quest into building home theatre PC’s, then mini PC’s was waning.  ITX boards were just entering the market and the space under our bed was filling up with old PC components that once had a home in our cramped little office.  I think there’s still a wired keyboard under there for emergencies.  Maybe this constant PC updating and fixing could be alleviated by going to a Mac.  I couldn’t just open up one of those on a whim…or so I thought.

Switching both hardware and operating systems couldn’t be that easy.  Before committing, I did some serious searching to see how a Mac could possibly run all those Windows programs we paid good money for.  BootCamp was new and there was no way I could convince the girlfriend to reboot the computer every time she wanted to switch between Mac OS X and the photo editing programs she was used to.  As many of you already know…run a virtual machine! For yet more money and headache, you can start up a virtual windows environment to continue running those programs that we just weren’t ready to part with.  I did Parallels and VMWare Fusion.  I would say it only really takes a few months or so to wean yourself off of those old PC programs when you need to go through a few extra steps start up a virtual machine.  Maybe it’s the constant Windows updates that the virtual machine wants to do just because you haven’t fired it up in a few weeks.  I was actually hoping that I could run Civ4 on through Parallels…but no such luck.

Graduating to a Macbook Air

Back in 2011, the girlfriend and I took off for a few months on vacation.  It was a leave of absence, since no one on in this industrious North American continent would ever get that much vacation.  I wanted to try my hand at writing, and specifically blogging. If we were to be gone for a while, the little Acer Aspire One netbook that I picked up a few years earlier I knew just wouldn’t cut it.  It’s a machine that is heavy, needed a new battery, and was uncomfortable to type on.  A great little travel machine when it came out (my girlfriend’s parents still use theirs when on vacation), but it’s a PC and always needs updates.

As a treat to myself, and to encourage me to write, I bought the little 11″ mid 2011 Macbook Air.  Lightweight, decent battery life, English keyboard by default (that damn bilingual keyboard here in Canada is no fun to type on).  I liked the hardware Apple had put forth.  I liked the thought that I could walk into a little French or Italian coffee shop and spend an afternoon writing a thousand words or so of random musings or observations.  A machine that I was proud to own, light enough that I would want to pack it around on a regular basis.

I was due for a laptop upgrade at work.  Our IT department consists of only an on-call guy who might show up every few months.  If there is a budget for a new laptop, there is a pecking order and I happened to be next on the list.  The previous guys traded in theie beasts of machines for ultrabooks, mainly because they were lightweight and have amazing battery life.  No company mandated suppliers or specific models required, so when I started looking for what might just work for me…I asked ‘Why not a Mac?’

I started with a little research to see what people might be using to run Solidworks.  Sure there are recommended operating specs, and a separate graphics card is always a better option when you need true performance…but could an integrated graphics option (system on a chip) do just the trick?

I found articles from college kids that said they were running Solidworks on a Macbook Pro, but what about the Air?  A simple forum post just doesn’t give someone like me sufficient info to make the decision to fork out the dollars for one of these machines.  The great thing about Apple products though is the ‘no questions asked’ return policy within 2 weeks.  Use, abuse, and learn is what I was thinking.

So, a MacBook Air is on order.  Forum recommendations for anyone else running SW is to just go for a fast processor.  Dual or Quad cores be damned…just plain speed.  So that’s what we’re evaluating here… plain and simple.  As soon as the machine arrives…it will be time to figuratively get my hands dirty.  Let’s get it on!!