3 Tips to Optimize Windows 7 Settings for the Macbook

How to Improve your Windows 7 Experience

When installing Solidworks 2013 on one of these ultra portable Macbook Air machines, I knew there might be less than desired performance due to the lower horsepower Haswell i7 processor.  Sure the graphics boost Intel had designed in will be handy with the display, but with a power hungry 3d modelling program…sometimes you just want a little bit more processing power.

Initially I was hoping for the Macbook Pro to see an update, alongside the Air.  If you already have one of the higher end mid 2012 Macbook Pro‘s, then you know that inside the heart of this pretty little machine has a quad-core Intel Core i7 Ivy Bridge with an additional 6 MB on-chip.  I was salivating at the thought of a Haswell chip with comparable performance…but all was for nought.  The Macbook Air was in my sights and now just a matter of figuring out how best to set up this machine for optimum Windows programs performance, specifically Solidworks.

#1 Optimize for Performance, over graphics

To give your new Macbook Air a bit of a performance boost, think about all the pretty graphics features that Microsoft worked into their Windows 7 release.  The shading on graphics, shimmering icons, translucent selection windows… all extras that really aren’t required, but do make your experience a little more satisfying.

All these little extras come with a price though, and that extra prettiness robs you of a little processor horsepower.  Being as I’m looking for a robust Solidworks experience instead of smoothed font edges or menu that fade out on closing, adjusting the visual effects for best performance instead of best appearance makes sense. 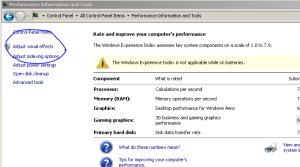 To do so, open your Control Panel and look for Performance and Information Tools.  At the top left of that window, you’ll see Adjust Visual Effects.  In your next window…select Adjust for Best Performance.  Easy as pie, although making a pie takes much longer and has much tastier results.

With the Macbook Air in hand, and Windows 7 Pro installed despite a few hiccups, the first task was to boost the virtual memory.  I have never run a personal test to check the difference in performance between virtual memory set to zero, or maxed out, but made it a habit years ago to max out…just in case.  Microsoft’s spiel on virtual memory suggests this might be a good move in general.

To set up your virtual memory, in that popup for adjusting the visual effects you’ll see another tab called ‘Advanced’.  Give that a click.  About mid way down that window you’ll see your Virtual Memory allotment, and a button to Change.  Click on that and you can set up a custom amount for your virtual memory.  Press OK to have the setting take effect (which may also require a machine restart).  Giddy up!

Now that you’re familiar with this Performance Information and Tools window, you may have noticed just a few lines down from Adjusting Visual Effects that there was another option to adjust your power settings.  Let’s just click on that Adjust Power Settings link on the upper lefthand list. 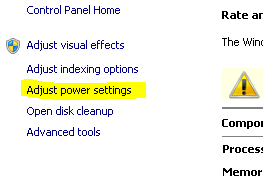 And with that, another window pops up to show you that your power plan has probably been set by default to either Balanced or Power Saver.  Now you already have a low power chip and a big battery, so to unleash that extra processing performance… go with the High Performance option.  This seems to give the most obvious, and easiest, performance boost when I am running Solidworks 2013.  I find that the sketches and surfaces of complex parts rebuild much faster. 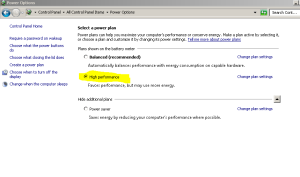 If you can’t find the High Performance option in the power settings, it might be under the Show Additional Plans dropdown.  That’s where mine was.  As for the effect on battery life, I haven’t done those tests yet.  If you have made these changes to your settings and have any experience of your own, let us know in the comments below.

I guess I’ll have to put another quick video of SW2013, and how it quickly responds with these changes to the Windows power settings.  Thanks for reading!