I recently acquired a couple late 2009 iMacs, for a great price, to be repurposed for website development work…like this site.  These machines were being sold off from a local college,and the hard drive wiped of even the operating system. 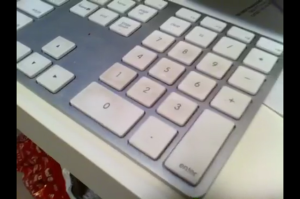 It’s not often that I get a machine that is so clean.  Now I say clean, but these iMacs were only clean of data.  After 4 years of college use, the keyboards were layered with all that I could describe as ‘scunge’.  Grungy and scuzzy.  I think in addition to finger dirt, there may have even been a booger or two stuck to the keys.  Time to break out the rubber gloves.

Being as these machines had no operating system, they needed something to work with.  Mavericks is compatible with iMacs going all the way back to 2007, so there should be no reason an install of 10.9 on these machines shouldn’t work. 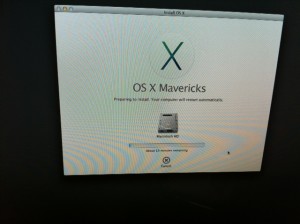 Of course, Mavericks is readily available through the App Store…but that is only a starting point.  Granted that if you happen to be reading this article because you are in the same boat, then I know you already have access to the internet for solutions.

Try Restoring a Mavericks Backup Instead

Maybe it was the beer.  Maybe the well used iMac needed a bit more coddling before I forced Mavericks on her.  I did run into a few complications on one of those installs, and after a couple attempts of installing both Mavericks and Snow Leopard (I had a DVD buried in the back of a cabinet alongside my many old Windows program disks). 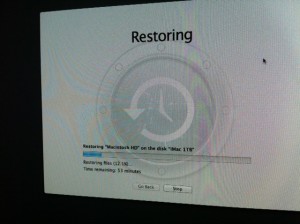 Forum searches for suggestions that maybe it was a hard drive, or RAM issue that was slowing my install on this one machine I conveniently named ‘Jill’ had me stumped for a bit.   When creating the Mavericks USB boot stick, you get the option of either installing OS X, or restore from a backup.  Luckily I had an external drive with a lot of extra space, so…I tried that option.   Time to restore from a backup. 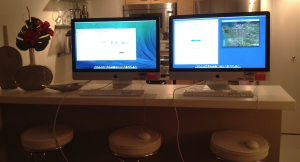 So your USB boot drive can be used for both installation of Mavericks, or restoring a OS X 10.9 compatible Time Machine backup.  Had I realized how quick the restoration from backup was…I would have gone this route first.  I did also put Windows 7 Pro on one of these iMacs…just for kicks, and because I did it before…but that’s a side note.