Solidworks Performance on the 2013 MacBook Air

Assessing SW2013 Performance on a Macbook

While looking to install PDM works, to start managing the pile of parts and drawings I have been working on, I ran across the Solidworks performance test in my Start Menu.  I can go on and on about how SW2013 runs on this MacBook Air, but that’s just my experience.  A true measure of performance in relation to other machines, many other machines, is what you as a reader want to see.

After clicking the program… a warning pops up indicating this test might take up to 30 minutes.  Not only that, but the program is also suggesting I don’t run any additional programs while conducting the test.  Considering I am attempting to document just a snippet of my Windows 7 experience with this 2013 Macbook Air, it would be a shame to not run another program or two to record what happens during this test.

Instead, I just let the program run and grabbed myself some lunch.  What do you know…it took less than 13 minutes on this machine!!

So what does the Solidworks Performance Test do?  This test does five passes of a series of operations.  I assume 5 is some average magic number where reporting out an average

It appears that the performance test is checking the time to fully load Solidworks in advance of working on any parts.  If you like to work with many different applications all at the same time, the results from this portion of the test might be a bit hampered.

The Performance Test makes a point of fully loading, and closing down after each each evaluation it does.

I have attempted to demonstrate with earlier posts the difference in assembly performance with an increase in part count.  This performance test is a bit more standardized, instead opening an injection mold assembly.  This assembly consists of 7 subassemblies, and has some of the parts set to transparent to tax your system a little more than usual. 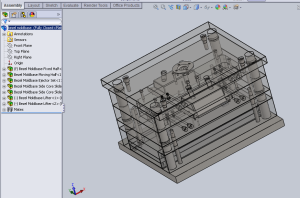 After loading the assembly, a series of very rapid rotations of the on-screen assembly occur which may think your machine is on the fritz.  Hang in there, maybe a few zooms in and out will catch your attention.

Switches over to Solidworks drawing file

The assembly file closes and the associated drawing file opens for a moment to assess zooming ability.  I find this Macbook air completes this test almost too quick to really understand all that is being assessed here.

Later on in the performance test, a part drawing is loaded and is more rigorously tested.  By rigorous, I mean the test takes a bit more time to complete it’s actions on the drawing with a bunch of zooming in and out.  Sure there’s more going on here, but I’ll leave it up to the true enthusiasts to discuss exactly what is happening.

A file referred to as ‘Carrier’ is loaded by the Performance Test, and does seem to take a while to load.  The test part does have about 20 complex features in it, with a bunch of patterned and mirrored features.  I do also see they have gone to the extent of including sheet metal features as well in the part.  Glad I don’t do that kind of hardcore designing these days. 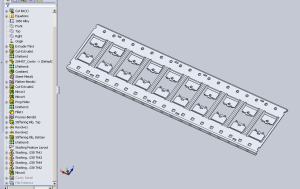 I like the rendering option for parts.  I do use this feature in Solidworks for exporting clean looking images for use in presentations.  It’s also nice to show side by side images of modelled parts and machined parts.  This part of the test seems to complete also rather quickly in less than 8 seconds.  If you missed it during the first pass, you have another 4 passes to see this rendering in action.

And the Performance Test Results

I was a little surprised to see there wasn’t a whole lot reported at the end of this test.  Being how much activity the processor must have gone through, I figured there might be a few pages of results along with an executive summary.  Instead, all I got was this. 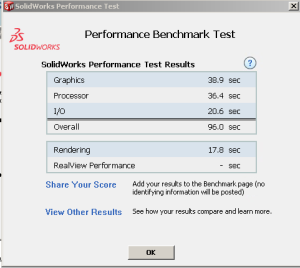 Now without a second machine to compare your results to, these numbers don’t mean a whole lot.  Have a look at the shared performance test results on the Solidworks site.  I did a quick search in the results for Macbook Air’s, and to my surprise there were a few other published results.  Have a quick look!

2 Responses to Solidworks Performance on the 2013 MacBook Air